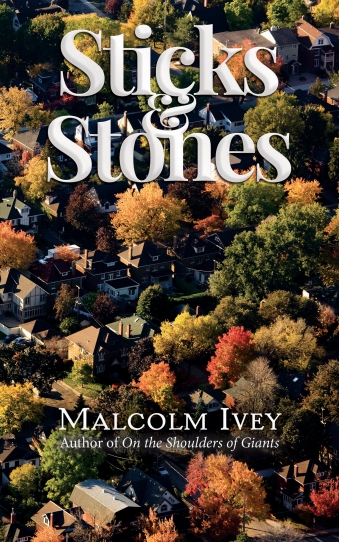 The house was dusty but otherwise clean. It smelled like new paint. He removed his shoes and walked barefoot on the carpet, exploring each room. His shadow loomed large beside him, mimicking his movements as he paced along the baseboards, brushing his fingertips against the drywall.

He flicked on the light in his old bedroom. It seemed smaller. The entire house seemed smaller. An optical illusion of the mind’s eye. Things were always bigger in childhood memories.

The side door to the garage was across the hall. There was a crack in the wood that was patched with silver duct tape. He turned the bronze, paint-flecked knob and it opened with a creak.

He groped along the wall for the light switch, a yellow overhead bulb sputtered to life and there, center stage, among the drop cloths and empty paint buckets sat his sixteenth birthday present: a 1984 Chevrolet Silverado. The tires were low, the antenna was broken, and bunched wires hung from the cavity that once held a radio, but it was still just as beautiful as it was in ’86 when he came home from school to find it parked in the driveway with a gigantic red bow on the hood.

He climbed into the driver seat. Some trespasser had left a few empty beer cans on the floorboard. He swept them out with his foot. He also noticed a cluster of cigarette burns on the passenger seat. Nothing that can’t be fixed. He glanced at the odometer. 37,595 miles. Not much more than when he went away. He imagined how let down his father must have been that day, how crushed his mother was.

He gripped the steering wheel and leaned his head against it. Tears filled his eyes. He let them fall. He wasn’t in prison anymore. He was home. And a man could cry in his own home if he wanted to.

After a few minutes, he wiped his eyes and tried the key in the ignition. Nothing. He didn’t expect it to turn over. The battery would be long dead, if not stolen. He’d get under the hood tomorrow. He gave the steering column a loving pat and climbed out of the truck. Exhaustion was beginning to wear on him. Bed or no bed, the idea of sleeping in his own room was suddenly appealing.

He paused at the light switch. Something on the door frame caught his eye. Notches. Twelve of them, ranging from knee to chest high. He remembered the pomp and fanfare of each measurement, the excitement of an inch grown. He reached out and touched the lowest indention as if it held remnants of energy from a happier, more innocent time. On impulse, he turned and got flush with the frame, using his key to make a new notch. Then he stepped back to study his handiwork.

He had grown almost a foot since the last measurement. The boy had returned home a man. Too bad no one was around to appreciate the difference. His father was long dead and it had been almost twenty years since his mother’s last incoherent letter.

He shut off the light and headed to his bedroom to get some sleep.

He couldn’t sleep. Maybe it was his nerves, maybe it was the ghosts, maybe it was the unforgiving floor, or the ripe stench of his unwashed body or the hunger pangs gnawing a hole in his belly. Whatever it was, after hours of lying flat in the darkness, listening to the voice in his head jog the hamster wheel of expectations, fears, fantasies, memories, failures, injustices and regrets mixed with the other standard mindless chatter, he finally gave up.

There was a thousand dollars in the bank bag, all hundreds. He shoved the bills in one pocket, his keys in another, and slipped on his shoes.

Electronic music pulsed through his next-door neighbor’s window. He heard a woman laughing. Farther off, a dog barked. The rest of the neighborhood slept. A half-moon hovered over the Magic Mart down the street. He set off in that direction.

A motorcycle puttered down the road that separated the cul de sac from the convenience store parking lot. He listened to it fade into the night. What time is it? Gotta be after midnight. He hoped he didn’t cross paths with a patrol car. Although, technically he had served his time and had nothing to fear, a tattooed ex-convict, fresh out of prison, roaming quiet suburban streets after midnight was a definite red flag to any cop worth his badge.

He was halfway to the store when he heard a car approaching. Instinctively, he stepped into the shadows. The car never appeared but the sound persisted. Is that a car? Or… what the hell is that? It wasn’t a roar, more of a whir. A whine. It sounded like it was coming from behind him, above him. He looked over his shoulder. Something moved in the darkness. A bird? A bat?

He took off running.

The Magic Mart cashier was watching through the window as he tore across the parking lot and ripped open the door.

She threw up her hands as the door slammed behind him.

He tried to catch his breath and explain simultaneously. “No, no, this isn’t… I’m not…” He pointed outside. “Something was chasing me.”

She squinted through the window at the empty fluorescent-lit parking lot.

He followed her gaze. “I think it was a bat.”

She eyed him skeptically.

He searched the night for a final time before gathering himself and turning down the first aisle of the store. Mirrors and cameras tracked his progress. He tried to relax but the cashier’s nervous energy was a living thing, feeding his own nervous energy. Back and forth it built and flowed until the entire store crackled with tension. Like a prison yard before a riot.

He picked up an overpriced jar of peanut butter and forced himself to speak. “Do you have any–”

He almost dropped the jar. “Are you okay?”

“Yes,” she said, touching her gray-streaked hair. “You just startled me.”

“Sorry about that. Do you have any soap? Deodorant? Stuff like that?”

She pointed a trembling finger at the opposite side of the store. “Aisle five. There isn’t much.”

He walked past the freezers, glancing at the different labels. Most he recognized only from magazine ads.

“I can’t sell you any alcohol,” she announced. “It’s ten after two.”

She continued to watch him suspiciously as he wandered toward the health and hygiene section. A pack of licorice in the candy aisle caught his eye and he bent to check the price. She was immediately on her toes, leaning left then right, trying to see what he was up to.

“Okay, you know what?” He straightened, dug in his pocket, and headed for the twitchy cashier.

She was already reaching for something – a phone? A panic button? A gun? – when he held up the wad of cash.

“Listen…” He glanced at her name tag. “Dot, I’m not a shoplifter. Okay? I’m just living in an empty house and I need to get some things, but I can’t even think of what I need because you’re stressing me out with all this … intense surveillance.”

She stiffened. “I’m doing my job.”

“I know, and I’m probably stressing you out too with the tattoos and the whole bat thing.” He paused and looked out the window again before laying one of the hundred dollar bills on the counter. “So why don’t you hang on to this while I figure out what I need. This way we can both relax.”

He studied her while she studied the bill. Late fifties, early sixties, fingernails gnawed to the quick, frown lines, shaky hands. Life had not been kind to Dot.

He returned the rest of the money to his pocket and walked back down the aisle, this time less tentative. He selected soap, deodorant, detergent. “Hey Dot, you don’t sell towels here do you?” Toilet paper, licorice, a bag of instant coffee, peanut butter, a loaf of bread and two cases of ramen noodle soup.

“You know this would cost a lot less at a grocery store,” she said as she scanned the items.

Mason shrugged. “My truck’s broke down.”

He lifted the bags from the counter and backed through the door. “Well, I live right down the road so you’ll probably be seeing a lot of me.”

She mumbled something as the door was closing. He absently turned it over in his mind as he hurried across the road, scanning trees and rooftops as he went. Halfway home, it came to him. He wasn’t certain but it sounded a lot like “watch out for bats.”