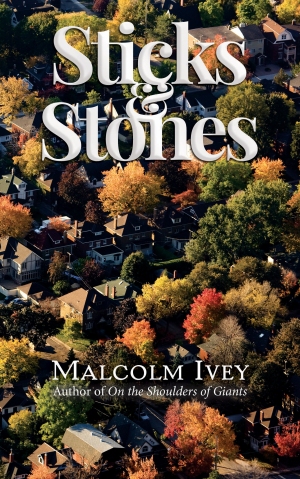 He did push-ups in the side yard beneath the river birch. Chest to the ground, feet elevated on the rusty wrought-iron chair, fifteen sets of forty. The same workout he’d been doing for most of his life. With the weather unusually warm for early November, sweat began to pour after two hundred. By the midway point, morphine-like endorphins shot across the gray-matter of his brain like flame-tipped arrows from archers in the hippocampus, nailing bullseye receptors in the cerebrum.

He dropped to the ground and took a swig of water from the bottle. That’s when he noticed it. The thing from the other night. The bat. Only it wasn’t a bat. It was some kind of flying robot apparatus, a dull black miniature helicopter with four propellers hovering just over his side of the neighbor’s privacy fence.

He looked around for a decent sized stick, then remembered the paint roller in the garage. It was easily six feet long. When added to his own six feet, plus his arm length, plus however high he could jump, he was certain he could knock it out of the air.

It was still there when he returned. He crept up on it like a hunter. The roller had hardened, stuck in place by dried paint. He held it over his shoulder, poised to strike.

As he drew near he could hear Pat Benatar through the fence. “Hit me with your best shot.” His neighbor was humming along. He glared up at the intruder.

“Fire away!” Ms. Benatar sang. He complied, leaping in the air and swinging the pole like a Samurai.

He missed it by a foot, knocking splinters from the privacy fence. The impact reverberated in his hands.

The mini-chopper disappeared around the front of the house. He dropped the pole and pulled his head over the fence to apologize. She was sunbathing topless.

“Whoa. Sorry,” he said, dropping back down.

He leaned against the boards, attempting to explain. “There was a … UFO up here. I mean … not like a flying saucer but,” he looked around, “it was unidentified and it was flying and … definitely an object.”

“Mason,” he said, glancing through a crack in the fence once more before walking away.

He returned the pole to the garage, the roller now dislodged and spinning freely from the impact. He was trying to decide whether to finish the workout when he saw the boy marching up his driveway.

“You almost broke my drone!”

Aha. “Is that what you call that thing?”

“Yeah whatever,” he said, walking back to the river birch to finish his push-ups. “Just keep it off my property.”

The boy followed. “It cost eight hundred dollars and my mom would’ve sued you if you broke it. Her boyfriend is a lawyer.”

“Yeah? Well I wonder what they’d do if they found out you were a peeping tom.”

“Something you could go to prison for.”

He propped his feet on the chair and hammered out forty push-ups. When he finished, the boy was still standing there.

“You need to go,” said Mason. “Your mom doesn’t want you down here.”

The boy ignored him, headed straight for the chair and attempted a set of his own. His arms trembled and his back sloped as he managed a meager eight.

When he got up he brushed the dirt from his hands and straightened his glasses. “How many did you do?”

He uncapped the water bottle and took a swig, hiding his smile.

“Are you a soldier?”

Mason shook his head as he dropped for another set. “You need to go.”

Again, the boy ignored him, waiting until he finished before placing his feet on the chair and banging out another eight.

“Why don’t you just go to the gym like my mom?”

He jumped up and grabbed the tree limb, pulling his chest to the branch. “Because gyms are social gatherings,” he said, “and I’m not social.”

“Me neither,” said the boy, watching him.

Mason used his t-shirt to wipe the sweat from his face.

“Why do you do push-ups anyway? Your muscles are big enough already.”

“I don’t work out for big muscles. I work out to keep from becoming a bug.”

The boy laughed. “You’ll turn into a bug if you don’t exercise? What kind? A beetle?”

“Not that kind of bug,” said Mason. “It keeps me from being a psych patient.”

Movement in his peripheral caused him to turn. The blonde was storming up his driveway. “Prime example,” he muttered under his breath.

The little girl came running behind her. “Hi Mason.”

The mother glared at him.

“Mom, this isn’t a social gathering.” The boy darted over to the river birch and assumed the position. “Watch this!”