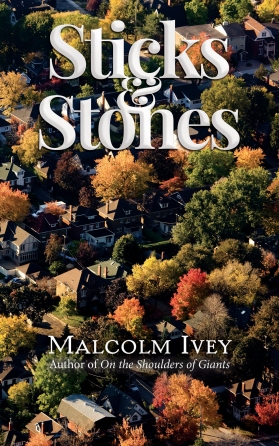 Chapter 15: Return to Harmony Meadows
The puddle of drool expanded in circumference, creeping across her pillowcase. Her gray eyes were open but unseeing. The only indication that her frail body still contained the spark of life was the ragged sound of her breathing and her toes fidgeting inside the white hospital socks.

She was staring straight through him.

“Hey.” He waved a hand in front of her face. “I brought you some chocolate.”

He stood and walked back into the hallway. The nurse at the desk looked old enough to be a patient.

She looked up, alarmed.

“I think my mom may be having a stroke.”

She was up and moving before he could finish his sentence.

“What makes you think that? Facial drooping?”

They entered the room. He lingered inside the doorway, giving her space to work.

“Ava,” she called as she rounded the bed. “Ava? It’s Emma, can you hear me sweetie?”

“See what I mean?” He caught himself gnawing on his thumbnail and dropped his hand. “That’s how I found her.”

The nurse took her pulse. “It’s not a stroke.”

Relief washed over him.

She smoothed her hair back. “Ava? Your son is here.”

Her toes continued to twitch.

The nurse took a Kleenex from the box on the night stand and dabbed the drool from her mouth, gently lifting her head to flip the pillow. “Ava, do you feel like visiting today?”

She signaled him to join her in the hallway.

“What’s wrong with her?”

There was kindness in her smile. “Nothing that hasn’t been wrong. And unfortunately, nothing that we can fix. It’s just one of those not-so-good days. She has them from time to time.”

As she spoke, he stood there ransacking the corners of his mind, groping for someone, anyone, to blame. But he could find only himself. Tears threatened to spill from his eyes. He blinked them back.

She looked away. “I know it hurts, sweetie. But you need to be strong. For her sake. This will probably happen more frequently as she continues to move into the late stage of the disease.”

“My nephew used to play my sister’s favorite Everly Brothers songs while they looked at old photographs together. That seemed to bring Hazel some happiness, although by then she had lost the ability to communicate with words and could barely eat or swallow.”

He nodded. The hallway walls were suddenly closer than they were a second before.

“Or you could brush her hair or take her outside.”

The crushing weight of her condition was staggering. He knew loneliness and isolation well, but what his mother was suffering was something altogether different. Her reality made it difficult for him to breathe. “Thanks,” he managed, turning to leave, resisting the impulse to run. “I will.”

Chapter 16: Area of Expertise
They kissed in his Lexus, in a far-flung corner of the parking garage of the hospital where she worked. His fingertips brushed the back of her neck while his beard stubble pressed against her face. He leaned into her, drowning out her guilt, smothering it by the force of his desire.

His hand stroked her cheek then began to meander.

She pushed him away, catching her breath. “Blane…”

“That was nice,” he said, his caramel eyes staring straight into hers. “Very much worth the wait.”

She looked away. “I think so too.”

Classical music erupted from his cell phone. He glanced at the number and silenced it. “I was beginning to think you didn’t like me.”

He reached for her again. “Let me just make absolutely sure.”

The second kiss was even more insistent. She closed her eyes and let go. He was both steel and silk, raw power and gentleness, forcing her against the passenger door yet cradling her head, protecting her. Fragments of some distant memory floated around the galaxy of her mind. As she surrendered to his kiss, she examined each hazy puzzle piece with a nagging sense of forlorn nostalgia, until they pulled into focus and her husband was looking back at her.

Again, she pushed him away.

“You’re killing me,” he said, his voice thick with desire.

She stared down at her hands. Her left ring finger seemed foreign without the gold band that had encompassed it for so long. Naked. Even the old tan line and indentation had faded. Another betrayal.

He glanced at his Rolex. “Ethan?”

“Evan.” The fading afterimage of her husband raised an eyebrow. “He’s been acting out at school. His teacher thinks he may have ADHD.”

He pulled down the visor, examining his face in the mirror, left side then right. “Not the end of the world. A partner at the firm has a grandson who was diagnosed last year. The right medication transformed him from a screaming little tyrant to a quiet, obedient child.”

Across the parking garage she saw the first wave of her coworkers returning from lunch. “I just don’t want some drug to stifle his personality. I’m going to talk to Dr. Diaz about it when he comes in today.”

“Sounds like a plan,” he said, reaching for her again. “I wouldn’t stress it too much.”

She allowed the embrace but turned away from his kiss. “That’s easy for you to say. Raising two kids alone is stressful. And now on top of everything else, there’s some criminal living at the end of the street who they’ve decided they want to be besties with.”

He played with a strand of her hair, twisting it around his finger for a moment before tucking it behind her ear. “How do you know he’s a criminal?”

“A neighbor told me he was just released from prison. I tried to look him up online but I couldn’t find anything.”

He reached for his phone. “Well lucky for you, this is my area of expertise. Have you searched the Department of Corrections website?”

She shook her head. “I just Googled—”

He tapped, scrolled, frowned, read for a second, then passed her the phone. “This our guy?”

She stared at the mugshot. Although his head was shaved she recognized him immediately. Same defiant blue-green eyes, same cocky dimpled chin, same powerfully built shoulders.

Beneath his picture was the word RELEASED along with a detailed description of his tattoos, scars, height, weight, aliases, priors, and last known address.