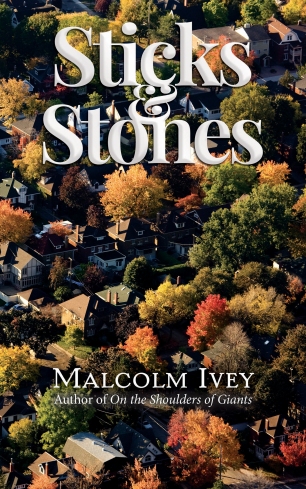 The best night of his life and he had no one to share it with. I kissed her! He considered hopping back in the truck and driving over to the nursing home. Even though his mom wouldn’t recognize him, it would still feel good to tell her.

He glanced at the clock on the oven. Almost 9:00 p.m. Visiting hours were seven to seven. No way he was driving across town to give Dr. Jennings’ nose-ringed granddaughter the pleasure of barring him entrance.

He could see Brooke’s house from his hallway window. Her bedroom light was on. He wondered if she was thinking of him too. Maybe she was staring through her blinds like he was. He reached out and flicked the light switch twice, hoping that she would respond in kind. Nothing.

Dude, how old are you? Thirteen?

Too jacked to eat, too early to sleep, he did what he always did with pent up energy.

The wind howled as he stepped onto the porch. The radio said it was forty degrees but it felt closer to twenty. Tammy had company. A red BMW was parked in her driveway. He thought of Evan’s size-seven Skecher in his solar plexus and laughed to himself.

The river birch bark flapped in the wind. Dead leaves crackled beneath his boots. He blew in his cupped hands, warming them, before grabbing the bar.

He didn’t bother counting. This was more about exorcising demons than exercising the body. He yanked his chest to the crossbar, paused, then exhaled on the way down. Stars shone through the network of limbs overhead. His muscles warmed as his mind wandered.

The sequence replayed in technicolor detail. Her jogging down the driveway, slipping into the passenger seat, shivering from the cold, the errant strands of hair that came loose when she pulled his sweatshirt over her head. Was she sleeping in it now? Her profile bathed in shadow, the way her mouth constructed words to fill the silence. The way her eyes spoke a softer language, one that transcended words. The shockwaves of that first spontaneous kiss, the urgency and heat of the second, the truck door opening and her running away…

It had been thirty years since he’d kissed a girl. Three drab and barren decades. Tens of thousands of colorless, monotone days, one blending into the next like the relentless procession of towns along some forgotten Midwestern highway. Each identical, each unremarkable.

He remembered his last. Most convicts do. When no new memories are being manufactured, one tends to cling to faded photographs of the mind. Her name was Leeann Lambert. She sat behind him in world history. Tall and shy, with gleaming silver braces, he kissed her at the bowling alley. Three days later, he was in jail for armed robbery.

During his odyssey through the criminal justice system, he often wondered if he had forgotten how to be with a woman. He worried that he would be emotionally incapable of having a relationship. He knew he was developmentally delayed when it came to matters of the heart. While the rest of the world was dating and hooking up and breaking up and making up and learning and growing with each new romance, he was doing push-ups in a cage.

Those fears, while natural, proved to be illusory. And just after sunset, they evaporated into nothing, shattered by a kiss.

Chapter 43: Breakfast of Champions
The ivory ringtone of Beethoven’s “Fur Elise” tickled the silence. The raven-haired stranger climbed over him and snatched his phone from the nightstand, giggling as she collapsed on the other side of the bed.

He stretched and yawned. “Let me see that.”

“No,” she pouted, rolling over, her curvy silhouette outlined by the white light emanating from the screen. An electronic aura.

“Who is Amos?” She pronounced it Ah-mos. Like some obscure conjugation of the Latin verb amor, to love. “Is she your novia?”

Her accent was South American. Somewhere below the Yucatan. Then he remembered. Claudia. The daughter of a Colombian nightclub owner who was serving forty years for second degree murder and badly in need of a post-conviction attorney. She wandered into his office after five in a leather mini, black lipstick, and a Louis Vuitton bag with a ten thousand dollar cash retainer.

“Amos is a man’s name. He’s my investigator.” He reached over and pried the phone from her hands, his head already pounding from a vicious hangover. “I need to take this.”

She pulled the sheet to her neck and pretended to sulk.

“What?” he growled into the phone as he swung his legs over the side of the bed.

“Morning, Boss. Sounds like you had a rough one.”

He walked to the bathroom and stood in front of the toilet. “Let’s dispense with the pleasantries, Amos. It’s too early.”

“Now that’s no way to talk to a feller that’s bringin’ good news.”

He broke wind as he urinated. “Out with it.”

“Well, ever since we had our little pow-wow, I’ve had my feelers out. It was tough sleddin’ there for a minute. Couldn’t find a shred of a hint of a rumor–”

“What on earth are you babbling about?” He opened his medicine cabinet, shook two Roxycontin 30s from a pill bottle into his palm, then headed for the kitchen.

“I’m talking about your special assignment. The feller I’m supposed to be digging up dirt on.”

He took an energy drink from the fridge and began crushing the Roxys on the glass dining room table. “Right, right. Proceed.”

“Well on Friday afternoon I spoke with a Detective Baxley, Robbery Division. An old friend of mine, Horace Powell, put me in touch with him. I worked narcotics with Horace back in the ’80s.”

Blane carved out two lines of the pharmaceutical grade opium on the dining room table. His blazer was hanging from the back of a chair. He dug in the pocket for his wallet and removed a $100 bill.

“I put a bug in his ear about a certain recently released bad guy that is back among the good citizens of Rosemont.”

Ben Franklin’s face disappeared as he rolled the money into a straw. “Well done, Amos. Just keep me posted, okay?”

“Hold your horses,” said the investigator, “I ain’t done yet. This morning he called me back. Says there was a robbery on the west side last night. The clerk thinks the suspect mighta drove off in a old black pickup but she ain’t sure. Didn’t see a license plate. But Baxley’s got no leads ‘sides our boy and he’d like to close the case if he can. He’s gonna show her a mugshot and see what she says.”

Blane chuckled. “He’s going to show her his mugshot? We call that coercion in a court of law.”

“Yeah? Well downtown we call it a day at the office.”

His naked reflection stared back from a mirror across the room. “This is not just egregiously immoral. It’s illegal.”

“So is armed robbery,” Amos shot back. “But if it offends your sense of justice that much, maybe you could represent him once he’s arrested.”

“Don’t be cute,” he sniffed. “What time will we know something?”

“Are you heading to the office now?”

Claudia strode into the living room, wrapped in his sheet. He paused, admiring her statuesque figure.

“Alrighty. I should be able to tell you something by the time you come in.”

“Good work, Amos.” He set the phone on the table.

“What’s this?” she brushed against him, frowning at the crushed parallel piles of grayish-white powder.

He leaned over and snorted both lines, then stood and downed half the energy drink before smiling and patting her backside.