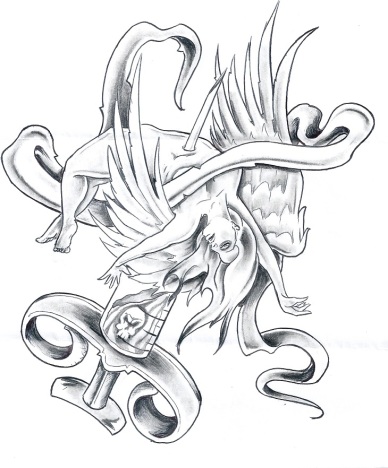 When I heard that 18-year-old Amber Robinson was beaten to death by a dude she met at a Rainbow Gathering, the story felt surreal. Oxymoronic. How does one reconcile the savage beating of a teenage girl with an event largely associated with peace and love? I would call it shocking but there is no such thing anymore. Not in this era of school shootings, church shootings, terrorist attacks, celebrity suicides, human trafficking, genital mutilation, and bath salts cannibalism. Each new atrocity is quickly drowned out by the next in the exhaustive 24-hour news cycle. The result is a sort of world-weary numbness.

Crushing? Absolutely. Shocking? Not at all.

I spoke with Amber a while back. My friend Amy was working on adopting her at the time and told me that she was an amazing artist. I offered to pay her to do the revised cover art for my third novel, On the Shoulders of Giants. While I thought the current cover was well drawn, I regretted showing the faces of Izzy and Pharaoh, the story’s two protagonists. I wanted the reader to have the freedom to see the characters according to his or her own imagination.

I really liked the idea of Amber doing the cover because she was a foster kid, just like Izzy. I envisioned a simple image: a syringe and a pen crossed like the letter X.

She read the novel and sketched a concept. But it wasn’t what I asked for … it was a million times better. This highly creative kid saw straight through to the soul of the story and drew an angel impaled on a syringe.

When I heard she was murdered, I dug through my old photographs and found her sketch. Amy had written this on the back:

“I really hope they let you keep this. She’s sketching it on canvas. I snuck in and took a picture of it for you. I think she started to do the needle/pen image as requested but she got lost in this metaphor of her family. I know it will mean something to you.”

Hell yeah it meant something. She nailed it. The perfect cover. Then I lost touch with Amy, a new book came out, a few great-nieces and great-nephews were born and like most foster kids, Amber was forgotten.

Until Amy informed me that she was murdered.

So now I’m back to wanting that cover changed. And it will happen. Another artist will take her sketch and fashion it into the cover I’ve always wanted. Amber will be given credit for her idea on the copyright page, I’ll revise the acknowledgements to mention her name, and maybe add her to the dedication. “For the forgotten, the lost, the state raised and Amber Robinson.”

But she’ll never know how brilliant I thought she was because I didn’t tell her when I had the chance.